It's finally time for Google to do what it does at every Google aisle lately, tell us what all the new features that are coming to the next version of android actually are, and we've got 'em right here on this phone.

There are new gestures.

There's always that kind of stuff, but Google's doing some other things that they don't do every year.

So for example, there's a new way to get OS updates, and there's an amazing feature called live caption.

Let's check it out.

So the first features to talk about are probably the ones that most people are gonna notice, and maybe even be the most excited about.

Number one, fan-favorite, everyone's been waiting.

There is finally a dark theme.

You just pull down the notification shade.

You tap that dark theme button, and ta-da, it's in dark theme.

The thing to notice about the dark theme is it has true proper black, so that will help save battery life.

If you turn on battery saver, it defaults to turning on the dark theme.

Also, a bunch of Google apps is gonna support it natively, so for example, photos, dark themes.

We can go and look at the calendar.

Now you may have noticed when I was showing you all those dark theme apps that I was getting around the OS in a completely different way.

There was a new gesture navigation system.

Google will try to take a baby step towards it with Android P.

With Android Q, its finally going all the way, and it's not that different from how an iPhone works, so if you're inside an app, you swipe up, it takes you home.

If you're home and you swipe up, it takes you to the app drawer.

Swipe in from the right edge of the screen, the arrow shows up, that serves as a back button, and that new back gesture is interesting because a lot of Android apps have an app drawer over on the left, and now they're gonna have to decide if they want the first swipe to open up the drawer or to just go back.

They can decide that app by app.

Now, if you want to do multitasking, you've got a couple of options.

You can still just quickly swipe along the bottom of where that little home button lozenge bar thing is, or you can swipe up and over to get into a proper multitasking view where you can swipe between different apps.

So dark theme and the new gesture navigation system.

It's a thing you're gonna notice.

It's a thing everyone's probably most excited to talk about, but I don't think they'rethe most important things that Google is doing in Android Q.

When it comes to Android updates, the biggest problem's always just getting the updates.

You never know if your phone is gonna get it.

You gotta wait for all these approvals.

It's a mess, and every year, Google tries something a little bit different to fix it.

This year, they're trying something really fascinating.

So I ask Steph Cuthbertson, the Director of Androidto explain it to me.

- Project Mainline is about enabling us to, especially for say those security-sensitive updates to deliver them to you very rapidly.

In fact, as rapidly as I can update a Google app.

So let's say, for example, you've got a security-sensitive part of the OS, which is where this is particularly useful.

With Mainline, we can now deliver those updates directly over the air.

- If you don't have a Google Play phone, say you're in China or you've got some weird knockoff thing.

You might miss out on that, although it is an open-source project, so it might also be able to help those phones too.

All that security stuff is great, but you're probably wondering about the big major feature updates, and whether or not they're gonna come faster.

- So that's the updated story on Android Q.

It's a little bit of like they're getting better on getting it pushed out to more manufacturers faster, but the bigger deal is they're gonna get those security updates pushed out much more quickly to many more phones.

Google's making privacy and security a big part of its push forAndroid Q, and I don't know, they're gonna have something like 40 or 50 different updates that are related to that, but the one that you're probably most likely to see is in settings, there's a new top-level privacy option, and that gives you a bunch of different controls for managing your data on your phone, and that includes both Google stuff, like clearing your google location history, but also permissions on the phone itself.

So if you go into the permission manager, it shows you all the different pieces of data you have.

- Location reminders are also a great feature because you're also may be wondering now, which apps did I turn location on for? I'm not sure I remember all of them, and what's helpful with reminders is in Q, every app that accesses location in Q, it will remind you and say, look, do you want this app to have location access? So you don't have to wonder if there's some app running in the background that has that access.

- All those permissions and data privacy changes are super, super important, but there are still a few more user-facing features to talk about.

In notifications, if you get a message from any messaging app, you'll see that there are these new buttons you can press to reply to it, and what's happening here is Android is actually locally on the device reading that message.

Nothing gets shared, and then figuring out how to reply to it.

So there's a context relevant reply like show a time or sure, or there's a button for the open map, so if it seems that there'a san address in there, you can just tap that open map, and it'll jump to the address inside Google Maps.

Google's ability to do that because it's figured out how to do a bunch of local machine learning on Android itself right on the device, and there's another thing that it can do that it's just, it's frankly flat-out amazing.

I've got a pre-saved video here from Google.

Start watching it, a person here talking, but you can tap this button and once you hit the volume button, and it starts showing you a live caption of what's being said on the video.

You can drag the caption around.

Use a double-tap to get more text on there.

You can even resize it if you want to.

What Android is doing locally on the device listening to the video that's being played, and then showing you a live caption of what is being said on the video, which is legitimately amazing, but also a real human good if you're deaf or hard-of-hearing, you've got more access to more videos because you can use this in any app, it doesn't matter.

Also if you're not, you can still just watch a video and not annoy everybody else that's around you by turning the volume up. 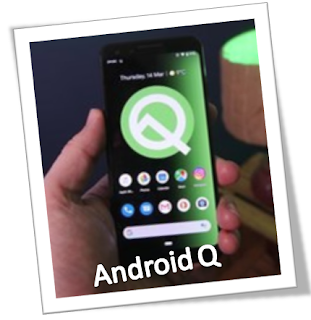 There's a new mode called focus mode which is sort of like do not disturb, but not really.

Basically what you can do is you can say, I'm in focus mode now, and turn off these apps that annoy me, and then they get grayed out, and you can't open them without a little popup saying you don't want to open this thing.

It's exactly what I want the digital well-being app timers to be.

It keeps you from opening them instead of waiting 'til you run out of time when you use them too much, and speaking of that digital well-being app timer thing, Google is finally integrating its family link software into it, so it's now combined app timers digital well-being and parental controls in the same space right built into the OS.

All right, so after all of that, what do I think of Android Q? Well, we'll have to review it to know for sure, but I have two things to say right now.

The first is that a lot of the stuff, it just feels a little bit overdue.

Better gestures, dark mode, and especially better permissions are things that I wish Google had done one, two, four, five years ago even.

So I'm glad they're finally here, but I wish they had come a little bit sooner.

The second thing is that Android Q doesn't have any big grandiose huge ideas about what an operating system on a phone could be.

Last year's Android Pi had all the stuff about slices and actions, blowing up apps, and exploding them all over the interface of the phone, but Q is a little bit more well, it's honestly it's iterative, and that iteration is super important, but I don't think it's gonna fundamentally change the way that you think about your phone.