New Red Rice series new products are currently beckoning us It's the upcoming Redmi K30 series It has been determined that the product will be released in December of this month The biggest difference from the previous generation K20 series is that it has support for 5G and also uses a digging screen.

And the most anticipated highlight of the Redmi K30 series is It will be the most cost-effective flagship series at the end of 2019 K30 series will include two products: Redmi K30 and K30 Pro And now it is certain that the Pro version must be a 5G product, In addition, it is also said that K30 may exist in 4G and 5G versions.

But what is considered more accurate is only the 4G version. 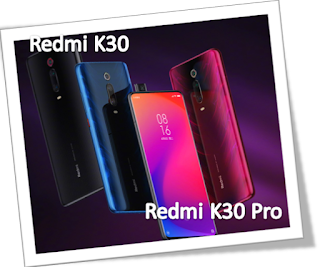 Then let ’s find out in advance the Redmi K30 series will bring some changes and features.

According to the leak, the Redmi K30 series is now Already confirmed for release on December 10 There will be two products, K30 and K30 Pro K30 and K30 Pro are almost similar in design They all use boring screens, and they are also dual front boring lenses The position of the opening is in the upper right corner of the screen and these two front lens pixels are 20MP for the main lens and 2MP for the lens.

As for the rear lens: both products are rear four cameras Both use a 64MP main camera, and the sensors are from Sony IMX686.


According to the current leak, Redmi K30 will probably Be Using a screen made of LCD material Screen size is 6.3 inches, with 2400 * 1080P resolution 20: 9 screen ratio with fifth-generation Gorilla Glass Supports 120Hz screen refresh rate.

The processor is Snapdragon 730G, which is an enhanced version of Snapdragon 730 There is a certain improvement in performance, but the disadvantage is that it does not support 5G networks Just as Xiaomi CC9 PRO was released a while ago Using Qualcomm 730G chip, it is only a 4G product.

Among other things, the Redmi K30 will also have NFC and provide a 3.5 mm headphone jack And has 4500mAh battery, cold liquid cooling Supports 30W fast charging, and the MIUI 11 version based on the Android 10 system is pre-installed by default.
Download

Redmi K30 Pro will be a 5G product, which has certain changes compared to K30 It also uses a 6.6-inch screen but it's a hyperbolic screen It looks more attractive than the former and is also an LCD material panel.

In other specifications: K30 Pro basically includes all the features of K30 And it's faster than the fast charge of the K30 Leaks indicate that it will provide a 66W wired fast charge.

presentation of redmi k30 will be held on December 10 but as we are used to absolutely everything and technical characteristics as well photos of this smartphone have already leaked to the network so today you tell reliable information about what will be Redmi k 30 hi my name is arseny and you on the techno channel man sit down comfortably drove many probably interested primarily in the design and appearance of this smartphone, therefore,
I will not torment you with expectations this is exactly what the new Redmi k30 looks like, and as for me, the design here is controversial all that same circle around the camera module but how do you like the design of the newly made smartphone from readme company be sure to share your opinion in the comments I will be very interested to read them since we started talking about the design of the back the cover, the most attentive noticed that there are no fingerprint scanner fingers of the back panel it was moved to the side excellent reference to the twentieth honor of Samsung galaxy of 10 but I fully support this decision because not everyone will like that,
the most outdated in terms of design fingerprint scanner on the back the lid and the ultrasonic under the screen fingerprint scanner is not like that fast as usual and here you are fast and accurate operation at the same time all convenient ergonomic arrangement Yes, and the design of the smartphone, this fingerprint scanner certainly will not spoil but ending the conversation about the back of this smartphone is hard not to mention camera and equipped with a new module from sony mx 680 6 with maximum resolution 64 megapixels true the size of such a pixel is only 0.8 micrometer, this figure is quite modest under the main camera module located telephoto at 8 megapixels which provides 2 times optical zoom, and here the size of one pixel is already were more than 1 and 4 micrometers 3 module so popular now it is shrinking by 5 megapixels well and the last fourth camera module is responsible for determining the depth in the photo but is it really so far no one knows because how many times in practice that this module turned out to be only fictitious and dummy definition of depth was only programmatic as well as blur photography about double optical zoom I He told me that for the video,
you’ll probably ask me everything here is also very nice in 4k video is recorded at 30 frames per second full HD with a recording function of 30 to 120 and as much as 240 frames per second but certainly, we hope and believe in frontal optical stabilization new from readme to pain reminds a novelty from Samsung galaxy s 10 plus the fault is the same double cutout for the front camera and how to do you like this solution from our Chinese friends,
what do you like more traveling camera droplet or similar screen cutout, ok the type of camera and the implementation of a thing is subjective to someone like it so someone likes it differently but here we have the display and ps LCD and many this fact probably disappoint, many probably would like to convince about the matrix for years, but in fact, we get ps LCD with a diagonal of 6.

67 inches and a resolution of 1080 by 2400 pixels but at least the pixel density here is normal 395 pi ah oh ok ok not everything here is so gloomy we got, in addition to everything, a screen with a frequency updates in 120 hertz you feel that somewhere clearly one stasis happy and what about that front alochka and here everything is also very interesting since we have here dual camera module first primary at 20 megapixels with aperture of 2.

2 and the second auxiliary depth module which will be responsible for the very beautiful butterfly for the work and functioning of the newly minted the flagship from the readme will respond with the new snapdragon 765 processor bundles of course with a video accelerator from Adri on but it will all work 10th android under the shell 11 Miyu key well, in the end, we get a good budget smartphone with content really a flagship that has a good battery for everything else four and a half miles ampere-hour with USB type si and immediately in stock 30 wad,
If you want fast charging, you want a budget version then burn 128 gigabytes built-in memory and 8 gigabytes of RAM; well, if jet exceeded for 30,000 forever wooden chooses 256 gigabytes of built-in and already 12 gigabytes RAM and audiophiles are also not forgotten here left everyone's favorite three and a half millimeter jack are you going update your smartphone to the new readme to 30 be sure to write your opinion on about the new smartphone and this video in the comments, well, if you need this video like it, your best thanks would be like a subscription and bell I tried hard on this issue and on the action that time we spent well for good meetings until.
Source: Youtube
Posted by Dr IM
Labels: Redmi K30, Redmi K30 Pro
Email ThisBlogThis!Share to TwitterShare to Facebook
at 08:27