Users from all over the world are waiting for the launch of Realme X50 Pro. Now the launch date of this smartphone has also been confirmed. This smartphone will be launched on February 24 at the MWC 2020 event to be held in Barcelona, ​​Spain. This has been confirmed by the Realme company itself in Vivo post. There was a lot of discussion in the worldwide smartphone market about the launch of this phone.  Some specific specifications of this smartphone were already known, out of which one very special thing is the 2 front camera of this phone. On this phone, the company has given not one but two front cameras. Because of which the quality of selfie and video call from this phone is expected to be quite great. The expected price of Realme X50 is 20,000 Rs.
Download

Now information about some more specifications of this phone has been revealed. These specifications have been revealed by Realme Chief Marketing Officer Zhu Chi Chase by posting a screenshot publicly. Some of the main features of Realme X50 Pro are revealed by looking at the screenshot of Zhu Chi Chase, Chief Marketing Officer of Realme.
Realme X50 Pro 5G phone also has LPDDRS RAM, 256 GB UFS 3.0 inbuilt storage and Qualcomm Snapdragon 865 processor up to 12 GB. Apart from this, Realme's new software update on this phone can also support Realme UI v1.0 based on Android 10. 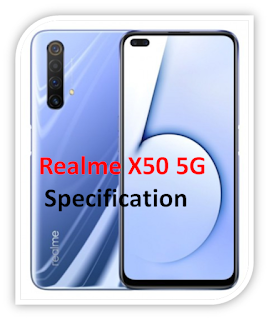 Compared to this, if you talk about Realme X50 5G, then it has a 2.4 GHz octa-core Snapdragon 765 G processor. It has RAM variants of eight and 12 GB. At the same time, up to 128 and 256 GB, internal storage is also provided. You can increase this internal storage up to 256 GB with the help of a micro SD card. Let us tell you that in this event, the Realme company has also launched Realme UI software. Realme X50 5G will be the first smartphone to run on Realme UI software based on Android 10.